Portland, Maine
August, 1928.
Steven Gilbert is a wealthy businessman, a leading exponent of the bourgeoisie of the roaring twenties. He sees his heritage project going up in smoke, when Timothy, his only six-year-old son, disappears.
A group of investigators will try to find his missing son. The group may include:

But Timothy´s disappearance is not the only gloomy burden weighing on the Gilbert family. Alyssa, Timothy's mother, committed suicide one year ago, and the reason for such an extreme action is still obscure.

The library is located just one block from the inn. The group gets there but need to waits some time until it is open.
The building is a mix of red brick, pebbledash and half timbering with red clay tile roofs and tile hung walls. Windows are set in wood with leaded glass in iron casement. The entrance is a heavy oak doors with iron nails and fittings.

When the library keeper opens the door, she welcomes visitors with a tender smile. She´s a lady who´s probably approaching the sixty. She must have been very attractive, before the wrinkles began to dig her face. The curly hair is a mixture of gray and blond, looking like grass slowly withering with time. She is dressed in a long grey cotton dress.

Internally, beyond the main door is a small room, with a desk for the library keeper. On the wall are shelves full of archives, where books are cataloged and books loans are registered. There´s a large room on the ground floor, and another smaller on the upper floor. The rooms are filled with metal shelves, painted with a staunchly neutral shade of blue gray, housing row upon neat row of leather bound books. Clear labels, painted in a smooth and steady hand, direct easily to the desired direction.
Upstairs, behind a marble arch, decorated with sculpted Art Nouveau figures of the seven muses, waits a small rare book section. Here the shelves are of exquisitely lacquered wood, protected from light and dust by panes of lucent glass.
Top

"I'd like to research the sign of Virgo and see what else I can find out about its significance," says Kathryn to her friends. "We might also want to look into the Bay of Fundy and its curse, as well as K'n-yeil, whatever that is."
Doctor Who/Call of Cthulhu Campaign:
(viewforum.php?f=176)The Terror Out of Time
The Ninth Planet
The Shadow Over Dunwich
The Brotherhood of Death
The Horror in the Blackout
Top 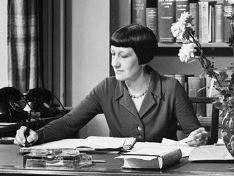 "I'll take a look through the local history section. Maybe there's something about the storms and weird floods. After that, perhaps there's a collection of occult books which might help us decipher Martin's notes."

Ivy heads off towards the local history section.
Top

The investigators begin to search books and newspapers. Their work requires patience, and they need to spend the whole afternoon doing this. There are some newspapers and some articles about the geography and the economy of Greyton. There is nothing that refers to K'n-yeil, but there seems to be something strange in the bay, far from the coast of Greyton.

Coney island, an island about thirty miles from the coast, in the Bay of Fundy, has become increasingly isolated in recent decades. While the other remote islands increased contact with the world, the people of Coney Island became increasingly isolated. In the last ten years, no one in Greyton has seen anyone from the island. No one in Greyton has any idea about how life is overthere. Over time, the people of Greyton got used to it and whoever had some relationship with the island forgot about that. However, Greyton somewhat depends on that island. The Andersons, a wealthy family that owns most of the boats and rent them to the fishermen, lives on that island. In recent years, the Anderson. dedicated their time to study the ecology of the Atlantic and its environmental conditions. This allowed them to better understand the fish migrations. There are two persons in Greyton who act as intermediaries between the Andersons and the fishermen. One of these is Sawney Dumbar, the guardian of the Greyton lighthouse. The other is a young woman named Darcy Mooney. She is the woman the group has met at the inn yesterday night.

On the second floor, among the oldest books, the group finds two books, hidden among other volumes so as not to be easily noticed. They are rather unusual for a library in a small town like Greyton. However, what catches the attention are some notebook papers, written by someone who has studied or tried to study these books. The calligraphy corresponds to that of the notebook found at Amanda's home.

The first text is a book of Nordic mythology, called Poetic Edda an unnamed collection of Old Norse anonymous songs and poems. It is a version in old English. Thompson seemed to be particularly interested in the Song of Njord. In Norse mythology, Njord is a god associated with the sea, seafaring, wind, fishing, wealth, and crop fertility. The Song of Njord is a song of protection for navigators who have to embark on a dangerous journey.
The other is an ancient book written in Latin, looking like the transcription from a runic language. Next to this book is a notebook with yellowed pages. It contains notes translated from the runic, by they are confused. Many words are missing, looks more like a failed attempt to translate. The ancient book is bound in red leather, cracked and dry with age. It smells warm and dusty, like the inside of an attic. The fragile old pages almost becomes delicate snowflakes with the touch of the hand.

Searching about the Sign of Virgo, nothing more than what everyone knows is found. Virgo in antiquity was associated with fertility and procreation deities. It doesn't seem to mean anything else macabre or occult. But then... something in the old newspapers is found... perhaps coincidence ... something that happened in Greyton ... to two mothers.
One year ago, a child named Johnny disappeared while playing on Kenneth beach. It was early in the morning. The weather changed quickly, and a storm occurred. His mother, Jane Norris was there, and saw a big wave suddenly submerging his child and taking him away. Everybody thinks the child have drowned, but his body was never found. Five years ago, a woman called Emma Weeks was found on Kenneth beach in a state of confusion. She claims she had been raped, but the doctor visited her and concluded that no raping occurred. Nine months later, she gave birth to an abortion.
Top

Ivy's head spins when reading all of this nonsense. But, following the strange things they've encountered, is it really nonsense?

For some reason she cannot fathom, she copies down the Song of Njord in her notepad, and secretly pockets the notebook found in the mouldering grimoire.

She compares her findings with the others and then thinks for a while.

"So it seems like the Andersons are somehow central to all of this. Maybe the missing boy is on that island? We need to investigate the lighthouse keeper Dumbar and Darcy. We should also talk to the two mothers, Weeks and Norris."
Top

"Yes, we'll need to talk to all of these people," says Kathryn, disturbed by what she has read. "The doctor too. Not tonight, of course, it's too late to call on them."
Doctor Who/Call of Cthulhu Campaign:
(viewforum.php?f=176)The Terror Out of Time
The Ninth Planet
The Shadow Over Dunwich
The Brotherhood of Death
The Horror in the Blackout
Top

Michael will check back with the ladies to see what they found out, and tell them anything of interest found at the docks.
Top

OOC,I'm ready to move to the next day too.
Doctor Who/Call of Cthulhu Campaign:
(viewforum.php?f=176)The Terror Out of Time
The Ninth Planet
The Shadow Over Dunwich
The Brotherhood of Death
The Horror in the Blackout
Top