A five-year old girl, Regina Balfour, is kidnapped in broad daylight from the Eden Shopping Centre, while her mother’s back is momentarily turned. Left behind is her ladybird shaped backpack, which contained supplies for her insulin pump. She needs her medication to live more than a few days, and her condition will rapidly deteriorate without it...

In the heavy Oxford traffic driving is slow going. Crawling up Hollybush Row towards Frideswide Square, without warning, something bounces off the windscreen, a large insect. 'Shit' curses Bates. Then another hits, this time splattering against the glass. More and more insects strike the car, seemingly coming out of nowhere, and before long DS Bates has to stop beside the road to avoid an accident, the windscreen thick with insects, their smashed bodies, and oozing internal juices. They swarm over the car, some wriggling in through the air vents and dropping onto the floor. They're large insects, crickets or grasshoppers maybe.

Bates opens the door and climbs out, 'Take a look at this.' Outside the car the insects cover the car and other cars parked along the road. They are arrayed across the pavement, perched on lampposts, and up the walls of buildings. A mass of little bodies seething and writhing.

When the insects catch sight of the three of them they just stop moving, they seem to turn and stare straight at them, thousands and thousands of faceted little eyes and chewing mandibles. They just freeze and stare.

Spoiler:
It is very unsettling, test SAN loss 0/1 and hope Simon doesn't fail with his fragile state of mind.
Top

Jocelyn has seen enough strangeness that she is barely fazed.
Doctor Who/Call of Cthulhu Campaign:
(viewforum.php?f=176)The Terror Out of Time
The Ninth Planet
The Shadow Over Dunwich
The Brotherhood of Death
The Horror in the Blackout
Top

Simon barely keeps it together. Panic runs through him, but he forces logic to dispel it. "This is another of Balfour's tricks," He explains calmly, looking at Bates. "Now do you believe me about the weather? He must be using some kind of pulse to alter the insects behavior, similar to the sort of system some homes use to keep vermin out of their dwellings. I don't know the exact science, but that would be my guess."

"How far are we from Kris? Maybe someone can call him and I can talk to Lindsay on speaker."

'We're almost there' says DS Bates and they walk the final few yards into Frideswide Square. Approaching the square they stay in the road where the insects are less thick, but all feel them crunching underfoot. The insects don't disperse or get out of the way, they simply linger, turning to keep watching as they walk up the road. 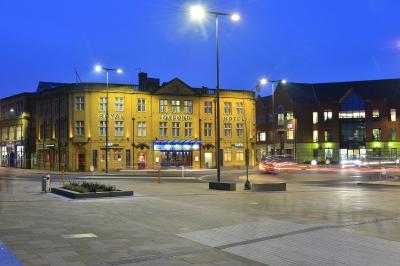 Dusk is starting to come in, the Neo-Georgian Royal Oxford Hotel is bathed in the glow of streetlights, illuminating warm Cotswold stone, but the flashing blue lights of several police cars starkly paint the surrounding buildings. It is reminiscent of arriving at the Eden Centre two nights ago.

The GNS van is parked a short distance away, up on the curb, half in a bus lane. Julie Thomas and her cameraman are already shooting.

Outside the hotel the pavement is thick with insects and they coat the ground level of the hotel facade. Bates is met by an authorised firearms officer (AFO) carrying an MP5 semi-automatic submachine gun and wearing a bulky bullet proof vest. She introduces herself as PC Hanna Wisniewski and explains that PC Grey and PC Babcock are already inside the hotel with DC Sapru.

She equips them with body armour and cautiously hands Jocelyn a Glock 17 pistol, 'I've got special authorisation from the Chief Inspector for you to carry this but you are not to use it without explicit say so, okay?' says Bates.

PC Wisniewski gestures to the hotel, 'Room is 223, top floor, north wing, looks out the back onto a loading area. No sight lines inside.' She gestures to the insects, 'Not sure what this is about but it shouldn't interfere with the operation.'
Top

"Understood," says Jocelyn to DS Bates, securing the Glock in a holster. "What happened before we got here? Do we have a line of communication with the room?"
Doctor Who/Call of Cthulhu Campaign:
(viewforum.php?f=176)The Terror Out of Time
The Ninth Planet
The Shadow Over Dunwich
The Brotherhood of Death
The Horror in the Blackout
Top

"I see Julie Thomas and friends are already here," Simon remarks with some annoyance.He looks over Bates shoulder, eager to speak with Lindsay. Though he knows he'll have to be careful, given others were already on the scene.
Top

'Not had the chance for a handover from DC Sapru yet, I believe he is talking with the assailant but no communication equipment has gone up yet' says Wisniewski, holding up a pair of radios.
Top

"Then we'd better take the radios and join him," says Jocelyn.
Doctor Who/Call of Cthulhu Campaign:
(viewforum.php?f=176)The Terror Out of Time
The Ninth Planet
The Shadow Over Dunwich
The Brotherhood of Death
The Horror in the Blackout
Top

Wisniewski leads them inside the hotel. The foyer is a little more contemporary than the 'Royal' moniker might suggest, all wood laminate and frosted green glass. Several uniformed officers are talking to staff behind the reception desk while others are leading guests out of the building.

DS Bates addresses Wisniewski, 'Take one of those radios up to Babcock and Grey. And send Sapru down here. I want a debrief before things go any further.'
Top

Jocelyn nods. "Do we have Regina's medicine here?" she asks.
Doctor Who/Call of Cthulhu Campaign:
(viewforum.php?f=176)The Terror Out of Time
The Ninth Planet
The Shadow Over Dunwich
The Brotherhood of Death
The Horror in the Blackout
Top

'I'm not sure if it is here yet but we have an ambulance due any minute and a doctor on the way' says Bates.
Top

"One of the first things we'll want to do is deliver the medicine, as soon as it arrives," says Jocelyn. "That will also give us the opportunity to get someone into the room to have a look round and talk to Lindsay Peale in person, as well as see how Regina is doing if she's in there."
Doctor Who/Call of Cthulhu Campaign:
(viewforum.php?f=176)The Terror Out of Time
The Ninth Planet
The Shadow Over Dunwich
The Brotherhood of Death
The Horror in the Blackout
Top

"I should speak with Lindsay as soon as possible," Simon asserts. "She's likely panicked and prone to making poor decisions at this point, and I'm likely the best equipped to talk her down."