"We only have to look at ourselves to see how intelligent life might develop into something we wouldn't want to meet." - Stephen Hawking

The reach of the Great Old Ones stretches out into the stars; far-future Cthulhu with the crew of the Pioneer Ship Searchlight.

Lieutenant Commander Rose Vinyard, the ship's Science Officer, steps out onto the bridge and almost stumbles into a wall in shock from what she sees before her. She recovers quickly, however, clearing her throat to cover her sudden nervousness. "What a bizarre planet...." She approaches the screen, trying to take in all of the information and come up with a hypothesis about what could turn the planet that colour.

Show,not sure what skill to use so I just made a roll!
Is it bad that I listen to this about ten times a day?

Spoiler:
That'd be an (easy) Chemistry check, Laraqua: the greens of the atmosphere suggest certain - highly caustic - chlorides in great quantities. You suppress a shudder at the thought of inhaling a lungful of that stuff!
"A not unlikely answer, Samantha, and an all-too appropriate quote perhaps, Pierre. Are we close enough for preliminary sensor scans?" The Captain nods.

The screen flickers and magnifies, and you see the Magellan up close for the first time. The view is, simply, incredible.

The Magellan itself is built around a double-ended spindle shape, with huge hydrogen-collection arrays to the fore, like the fronds of some undersea plant. Huge cables feed into radially-aligned, jettisonable fuel pods situated along the forward half and connected to the ship itself with large pylons that wink and glimmer with running lights like red and green jewels. The aft is dominated by the throats of the hydrogen drives, blacker inside than space itself, idle for decades perhaps. A long, self-contained hydroponics and oxygen factory deck runs the entire dorsal length of the ship; blast-shutters seal it from the wan glare of the sun, and at this distance it is impossible to tell if the lifegiving plants it contains still thrive. She is fully three miles long, and even at this magnification, the scale of her construction is impressive.
Large cargo bays distend the underside of the ship, making her bottom-heavy, though the upper decks, too, are bloated with the cryomodules that contained (and hopefully contain still) the sleeping colonists of a bygone era. From this far away, it is apparent that the ship has suffered some form of damage; sizable sections of the ship are denuded of paint (a surprisingly delicate shade of blue), and it looks like something has quite comprehensively destroyed a large part of the communications suites located above and below the colossal drives.

Spoiler:
More information on the Magellan can be found here and will be updated regularly. Also, the Captain asked Sierra Mbane to summon the rest of the crew a few minutes ago so she might want to do that.
Top 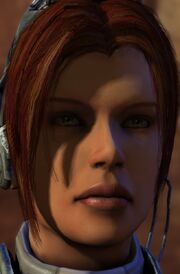 "That damage looks pretty extensive," says Sam. "I wonder what could have caused it? Did they fly through an asteroid field or something?"
Doctor Who/CoC Campaign:
(viewforum.php?f=176)The Terror Out of Time
(viewforum.php?f=191)]The Ninth Planet
The Shadow Over Dunwich
The Brotherhood of Death
The Horror in the Blackout
The Masque of Nyarlathotep
Top

"I suppose we won't know until someone boards," says Rose Vinyard. "If the computer systems are online, we should at least be able to retrieve the data on the ship pretty easily once someone reaches a terminal."
Is it bad that I listen to this about ten times a day?

Return to “In the Silence Between Stars”