Play by Post game boards for Call of Cthulhu and Horror RPGs
http://www.callofcthulhu.org.uk/pbp/

by jimacol
Great,
Can you at 5 to listen and 5 to spot hidden please.
Sorry the character sheet is a bit confusing, when I pasted from word it lost the bold and italics. If you want I can let you know the professional skills. I also supplemented some of the professional skills with a few hobby points to add to the confusion.
For equipment, a few tools of the trade for picking locks, breaking in, cracking safes etc would be useful

by Mr. Handy
Thanks, I would like to know which skills are your occupational skills. I thought I had it figured out, but I could easily be wrong.

You'll be able to get all of that stuff when equipment is issued.

by jimacol
Ok, so I made his professional skills from his life of crime as Climb, Conceal, Hide, Listen, Locksmith, Sneak, Spot Hidden, and I added Handgun from his UNIT training. I topped most of these up with Hobby points. I kind of wanted to make him a specialist in a specific field.
Hope this all checks out. Looking forward to seeing him on the Cast of Characters!

by Mr. Handy
I had thought you'd used the Covert Operative's occupational skills in the Your Career in U.N.I.T. thread, which are identical to the ones for Criminal in the rulebook, but it worked out the same either way, so it makes no difference. Your character sheet is now posted. I just need those few corrections for Valerie, and we may have one or two more new players before we start.

Mr. Handy wrote:There are a few things that need fixing, but after that you'll be all set. Valerie needs a last name. Also, at age 60 she would have 2 penalty points to her physical stats, not just 1. You can, however, fix this by simply making her 59 instead, as the second point kicks in at age 60. She can still be born in 1925 as long as it's late in 1925 (the story begins on September 5, 1985). You have 160 hobby skill points available, but you've spent only 159, so you may add that extra skill point to any skill of your choice. You do not need to edit your character sheet. You can just let me know which skill.

Every time I try to come up with a surname, I say Valerie and then get Singleton

However, I'll go with Soames for that Home Counties feel.

I'll stick with 60 and knock a point off Dex.

I'll add a point to Gardening. I'm determined to work that skill in somehow.

To make me more distinct from Elliott, I'll also take 10 off Locksmith and add it to disguise if that's ok. We don't have much overlap, apart from Sneak, and it will make plenty of sense that both are assigned to a mission.

by Mr. Handy
I actually know who Valerie Singleton is, in spite of being an American. They often have related Blue Peter segments as special features on classic Doctor Who DVDs, and I remember her from some of them.

Valerie Soames it is, then. It's funny, but we've been thinking along similar wavelengths, though Suffolk is somewhat further north. Wait until you see the names of some of the NPCs in this scenario. It could just be a coincidence, but there might be an opportunity for me to work it into the story.

The changes work fine, and I'll post your character sheet shortly. Now that the characters are all ready and I haven't heard from other potential new players, I'll try to get this started. If I can't get the IC threads up tonight, Thursday night looks good.

by markh
Jimacol, do you have any thoughts on whether Elliot and Valerie know each other? It could range from them making a bit of an "odd couple" team, to him never having encountered her in the field and thinking she was just the tea lady.

Mr Handy, I'm glad to hear that Dr Who is educational as well as entertaining

I'm thinking Mr Soames was a Home Counties type, and they settled just outside London after the war, but they had retired or semi-retired to the Suffolk area before his death. It seems to be a pretty common pattern - the area is heaving with retirees and second homes. I've put down "Southwold" as her home town, which actually not too far from Dunwich. It could just as easily be one of the coastal towns further north though, like Great Yarmouth.

by jimacol
Well I note from her background that she "does a little filing" for UNIT. I think maybe she was the one who caught Elliott stealing files from a UNIT office, and he could never get his head round how he got past all the security but was foiled by the tea lady. Since then the wayward Elliott has grown fond of her, like the mother he never really had, but is still unaware of her true role within UNIT. (Maybe that applies to the rest of the team as well?)

How does that sound as a start?

jimacol wrote:Well I note from her background that she "does a little filing" for UNIT. I think maybe she was the one who caught Elliott stealing files from a UNIT office, and he could never get his head round how he got past all the security but was foiled by the tea lady. Since then the wayward Elliott has grown fond of her, like the mother he never really had, but is still unaware of her true role within UNIT. (Maybe that applies to the rest of the team as well?)

How does that sound as a start?

Sounds good. I think a certain amount of mothering will be in her nature. Her daughter married a Frenchman, don't you know, and moved to a little house near Bordeaux. She tries to get over there a couple of times a year, but she can't leave her prize Hydrangeas for more than a week or so. So she likes to keep an eye on some of the quieter young people, make sure they're doing fine.

by tormsen
I tried to send this to Mr Handy for vetting, but the PM system is messing up. Here is my character concept, I think I've calculated everything correctly.

The only real problem is the low POW, I think. 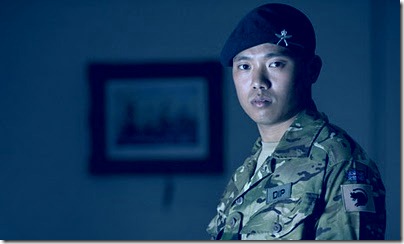 Sergeant Dipprasad Dharmadhoj, former soldier in the 2nd Battalion of the Royal Gurkha Rifles serving as part of the British Army in the War in Afghanistan. He comes from a long line of Gurkha soldiers serving in the British Army, dating from an ancestor who first fought under contract with the East India Company in the Pindaree War of 1817. His grandfather fought in North Africa against the Nazis with considerable distinction, and Dipprasad has also sought to be just as honorable a soldier as he was. His father spent most of his life serving in the 26th Gurkha Brigade sationed in Hong Kong, where Dipprasad spent his childhood until his family moved to the United Kingdom following handover in 1997.

His career in the military took a sudden turn in the mountains of Tora Bora in 2011, when a firefight broke out with Taliban mujahideen. During the battle, Dipprasad witnessed things that he could not understand or explain, and he suffered from tremendous mental shock watching a crippled old Afghan man cut through dozens of good British men with otherworldly magic. Despite this, he fought bravely and well, eliminating the threat before the summoning was completed. He was honorably discharged.

In the time that followed, he felt he had lost his mission in life. A taste of opium acquired in Afghanistan threatened to blossom into a full heroin addiction, but when Dipprasad was at his lowest point he happened to discover an secret diary kept by his grandfather during his time fighting in Libya. His grandfather's confession of unworldly encounters in the desert and their eventual defeat disturbed Dipprasad at first, but gave him strength in the end. He failed to kick the heroin completely, but he has become functional and motivated once more. He dedicates his each waking day to honoring the memory of his grandfather and the glory of Great Kali, Hindu goddess of time and death.

by DetectiveSocks
Hey tormsen! Welcome to the board! Looking over at your rolls, I noticed you used your 6s twice on both your STR and DEX and you haven't used your 11 that you rolled yet.

by tormsen
Thanks, I have adjusted several things.

by Mr. Handy
Welcome, Tormsen! Those rolls are horrible, even worse than some of the rolls I've had. I'd be willing to give you a mulligan on those if you wanted one. I had intended for you to take over the character of Elliot Webb (who has much better stats). At this stage, it would be tricky, though not impossible, to introduce a new character. If you still want to play this one, I'll work something out.

There are some changes that would be needed. Since this adventure takes place in 1985, your background will need to be adjusted accordingly. Your character would also need to be affiliated with UNIT UK at the present time, but that shouldn't be an issue. Your EDU score is an 8 due to your character's age rather than a 6. Your starting Sanity would be 20, not 18; you'd have a hard enough time as it is even with the extra 2 points. Your Cthulhu Mythos starts at 0. You may have seen some weird things in your background, but you don't know what it means yet. You've also overspent slightly on your skill points. You have 160 occupational skill points, but you've spent 163. You have 110 hobby skill points, but you've spent 117.

by tormsen
Hmm, OK. I will check out Elliot Webb and get back to you. I like my current character, but I might keep him around for a future game if it doesn't make sense to drop him in.

by Mr. Handy
Take your time. I'm sure you can always use the character you've built in another game later if you decide to play Elliot Webb. Take your time, but if you do decide to play him, you'll need to read Missing in Action, Infiltration, and Ghostwriter (his current thread) in order to catch up. You may read the Introduction, but please do not read any of the other In Character threads that don't involve your character. If you play Elliot, you may post in Ghostwriter as soon as you've caught up.

Thinking Covert Op, but haven't seen the rolls yet.

by Mr. Handy
Those rolls would work nicely for a Covert Operative. Valerie Soames has much worse stats, and she manages just fine as one, and even Elliot Webb's stats are lower overall.

by Thorn
Cool, I'll go with that, then

by Mr. Handy
You've still got time to finish creating your character, and there's no rush. If you need any help or have any questions, feel free to ask.
All times are UTC+01:00
Page 2 of 3